Your Excellencies and Distinguished Guests,

It is an honour for me to be here at the Palazzo Reale for this conference on the palace and for the Settimana della Cultura arabo-normanna to represent UNESCO in my role as a Goodwill Ambassador. Moreover as Chairman of the Khalili Foundation, we are proud to be supporting this important conference. Audrey Azoulay, Director General of UNESCO, was unfortunately unable to make it today as she is engaged at the WHL conference in Bahrain. She sends her best wishes to you all on this significant occasion.

As we are gathered here in such a historic place, let me begin by saying a word about heritage. Heritage is more than stones and buildings – it carries value, meaning and history. It embodies the legacy that defines our common humanity and helps ensure the cohesion of societies. Heritage demonstrates that the dialogue between cultures is a reality – it tells a harmonious history of constant exchange and proposes a common future.

We see this everywhere, but especially the Arab and Mediterranean regions. Behind the beauty of Palmyra, there is the history of the cultural influences of Asia, Persia and Rome and the identity of the Syrian people. In the sanctuary of Jonah in Mosul, there is the meeting of Judaism, Christianity and Islam – a symbol of unity. And here in Sicily, we see the unique fusion of Arab, Greek, Jewish and Latin cultures — all Mediterranean cultures — that manifest evidently and beautifully in the art and architecture of Norman Sicily, and in all aspects of the culture of the island down to this day— agriculture, cuisine, language, music and vernacular architecture.

In fact, what better example of such cultural fusion than where we are sitting right now – the magnificent Palazzo Reale, which wonderfully demonstrates the synthesis of Byzantine, Islamic and Romanesque art and architecture. The celebration and preservation of such places is of great importance to UNESCO.

Indeed, the preservation of cultural heritage and the promotion of intercultural understanding has been my own life’s work as a scholar, collector and philanthropist. For almost five decades, I have tirelessly sought to bring people together using art, culture and education.

I’d like to talk briefly about the power of art. Art is tremendously important in bringing people together because it is natural to the human condition. Religion and politics have their own languages; but the language of art is universal. It speaks directly to our hearts and minds, reminding us of all that is best about humanity.

This is why I have spent almost five decades collecting, conserving, researching, publishing and exhibiting some of the world’s finest works of art. Our Eight Collections cover most of the geographic regions of the world.  And each work has a story to tell about the confluence of diverse cultures. Our Islamic Art and Hajj and the Arts of Pilgrimage Collections demonstrate this clearly.

Let us take some objects related to Sicily, for example. We have a gold coin from the time of the young Norman Count Roger II, before he became king, on which is written the Islamic proclamation of la ilah illa Allah – “there is no god except God”. We have a print of the circular map of the world, made by the geographer al-Idrisi, here, at the court of Roger II. Again, from Norman Sicily in the 12th century, we have a beautifully crafted copper alloy bird, engraved and decorated with inlaid silver tendrils, scrolls and arabesques. Most significantly, we have two velum quires from the only Qur’an to survive from Muslim Sicily, copied here, in Palermo in the year 982.

So as UNESCO Goodwill Ambassador, my message today is simple. As we embrace modernity and seek to transmit our own legacy to future generations, we must continue to protect humanity’s shared cultural heritage. In this, we all have a role to play, as experts, teachers or citizens. We must raise awareness about the shared history of our common humanity, and know more about the historical developments that have brought us together as a single family.

Each tinted fragment sparkles in the Sun; a thousand colours but the light is one. Thank you. 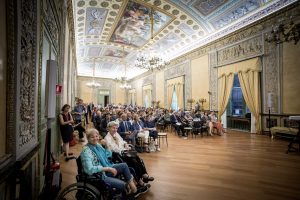 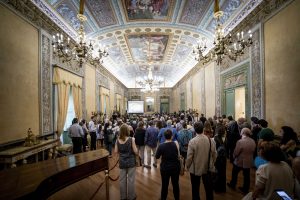 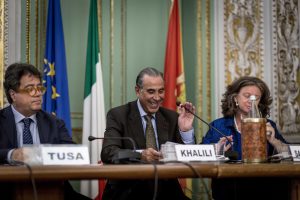 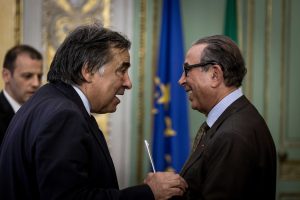 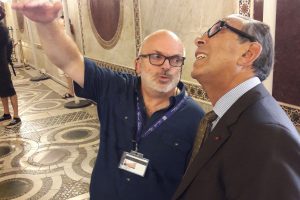 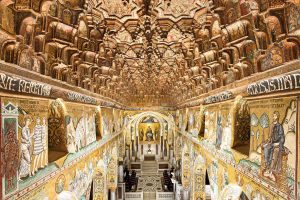